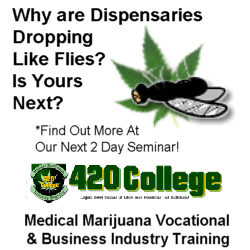 Our cannabis industry has gone from a scattered and secretive bunch of rebels operating outside the law to multi-millionaires heading up billion-dollar public companies that provide everything a person could possibly want in terms of weed. This has all happened in the previous decade — 2010 to 2019. What can we expect from this new decade?

The Big-Weed land grab will continue. Despite the best intentions of many involved in the legalization of marijuana in California, when any new industry starts there is always a land grab, and a consolidation immediately follows the land-grab stage. A new rapidly growing industry creates a lot of evolutionary mistakes and, at some point, the entire industry undergoes a redefinition and consolidation according to what the new consumer marketplace wants to buy.

An industry consolidation is also a time when the big money players do everything they can to expand their market share. They drop prices, flood the market, and maybe even conspire behind doors to drive their smaller competition to sell out their businesses.

The industry is going through a consolidation right now. Cannabis entrepreneurs have been dutifully paying application fees, hiring lawyers and consultants, leasing property and hiring architects — spending savings and going into debt in the hopes of being able to open their own cannabis businesses. Some make it through the application process only to be eaten alive by the monstrous costs of operation and legal compliance. In the largest cannabis market in the world the qualified individual entrepreneur is being squeezed out by two major problems: inefficient government and predatory money.

Governmental disorganization is a huge problem. Too many governmental parts are justifying their own existence by imposing nitpick rules and regulations. Worse, the rules are constantly being reviewed and changed. In short, there are too many divas and special interest groups that are attempting to establish financial and political power by manipulating as much of the legal and administrative operating system as possible. The resulting incompetence is staggering. Many well-meaning people fight to give those who suffered most under the War on Drugs an equal chance at the prosperity promised by the emerging cannabis industry, but the “power-grab” that is going along with the land-grab often favors those with the most money to invest in obtaining that power.

Many licenses are not being renewed, while hundreds of worthy applicants are waiting for the opportunity to open their businesses. No wonder California is having a difficult time taking business away from the black market. As long as the regulators are disorganized, incompetent, and greedy, Big Weed and the Cartels will dominate the cannabis industry. Political pull and lots of money to invest make Social Equity Programs ineffective because such programs are designed by people who are either incompetent or working in support of a special interest.

This year we have an opportunity to begin the new decade on the right track.  The majority of the business in the largest recreational and medical cannabis marketplace in the world is being controlled by black-market sources because the plans of both state and local governments didn’t work. It almost doesn’t matter why. The only thing that matters is that a lot of the people who the state and local authorities were trying to help, have lost life-savings money and outrageous lengths of time obeying all the rules and waiting patiently for months and sometimes as long as a year while a government committee decides their fate.

We have more work to do before this is an industry that is fair and prosperous for all involved. We call on Sacramento to step forward to simplify and repair what is broken in our current cannabis regulatory system.