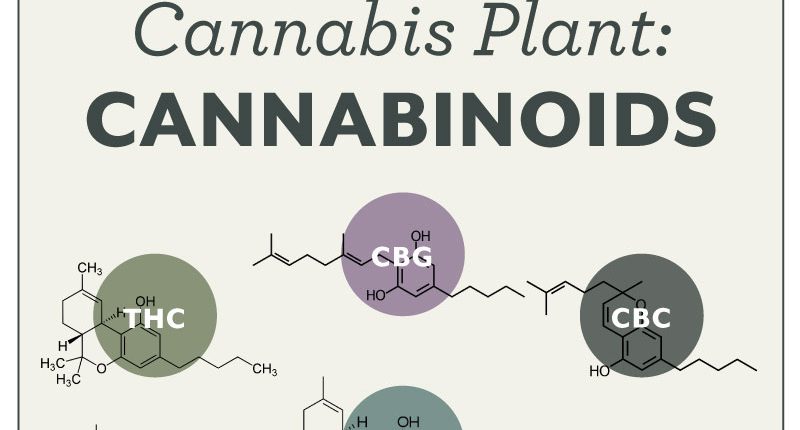 Terpenoids are a very large class of naturally occurring organic chemicals that come in thousands of varieties.  They contribute to scents and flavors and colors of plants, such as cinnamon or ginger.  Many are valued for herbal or medicinal properties(antibacterials, analgesics), such as menthol, camphor, or eucalyptol.

Thus, all cannabinoids are terpenoids,

BUT not all terpenoids are cannabinoids.

Cannabis does produce many terpenoids that are not cannabinoids, as well, but the cannabinoids are currently the compounds in which most people are interested.  Nevertheless, testing laboratories are embarking on a quest to identify and quantify several of the other terpenoids in cannabis that may, also, have medicinal qualities.

Cannabis plants are unique in that they make a compound called CBGA (cannabigerol acid).  This compound is the “mother” or “grandmother” to all of the rest of the cannabinoids.  Some of the more prevalent cannabinoids are listed below.  In the plant, CBGA gets converted mostly along three major divisions:

Most of the currently common strains produce primarily the THCA family (THC Molecule shown at left).

Years of hybridization efforts to increase the psychoactive potency of cannabis have, largely, been successful in this.

A few strains are known to sometimes produce more of the CBDA family and are of great interest now due to recent successful studies showing the great potential of CBD, in particular, as effective for treating numerous ailments.

The CBCA family is much less studied at this point, but, with the advent of new technologies*, the identification of strains with significant amounts of the CBCA family is just beginning.  In fact, this is true of almost all of the cannabinoids other than THC and CBD.

The research on most other compounds is still in its infancy, but results are being produced at an increasingly rapid pace.

Tests Available for These Common Cannabinoids*:

As always, consult your physician regarding the use of any medicine.

Close Up line drawings of cannabinoid molecules (From Cannabinoid Science)

Want to start a cannabis business? Learn how you can start today! Click here!